One of the Deep Tech’s largest and most well-recognised verticals, the sector offers promising perspectives both on defence and commercial applications. Also in Italy, which hosts a flourishing and varied ecosystem

If you could have any superpower, what would you like it to be? For many people, the answer would be ‘the ability to fly’. This is probably because as humans we have always been obsessed with ‘flying,’ with mentions of flying chariots, objects, and even personal wings, in many historical texts. Funnily enough, to deliver letters faster, people in the past have even resorted to using pigeons. Even now, when airplanes and helicopters have become readily available as means of transport, many still dream of being able to just soar the skies whenever they want in their personal vehicles of choice. ‘Space’ is another realm that has always intrigued the consciousness of mankind. It is as if the more we know, the less we realise we know. Notwithstanding that, as we explore, we have also been able to harness its properties to create resources for our technological betterment, for example, taking inspiration from the moon as a satellite and then creating our own mechanical ones.

The combined fascination with the two areas above has led to the birth of the sector Aerospace, which is in fact, a term used to collectively refer to: Atmosphere and Outer Space. The general industry deals with anything related to vehicular flight within and beyond Earth’s atmosphere, making it one of the largest and most influential industries with both private and public applications. It is, in fact, one of the Deep Tech sector’s largest and most well-recognised verticals.

Deep Tech companies produce nothing short of innovative discoveries, and therefore, for an Aerospace company to count as part of the deep tech sector, the product in development cannot be the conventional commercial aircraft or a new kind of related service. Whether a drone or satellite, the underlying solution should be as inimitable as possible while breaking some sort of technical or scientific boundary.

We can divide recent investments into two themed verticals: Drones and Satellites. In terms of the sub-sector drones, in particular unmanned air taxis and cargo drones, $3.8 billion of investment was performed in 2021 (+216.67% from 2020) according to a report by Phystech Ventures (an early-stage deep tech VC firm). This has led to the development of no fewer than 170 different e-VTOLs by almost 130 different countries. 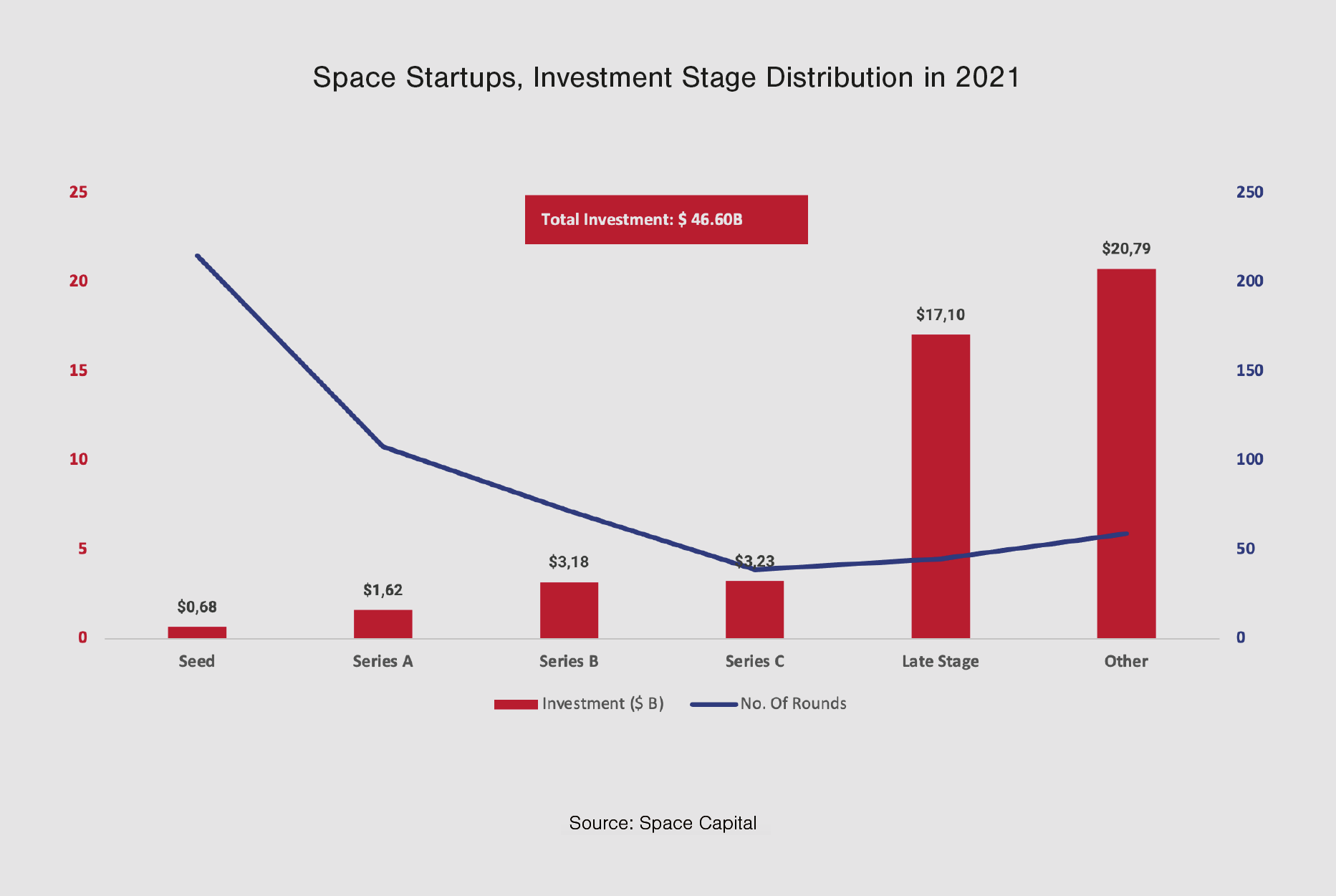 In terms of the sub-sector satellites, in 2021, $17 billion (+ 86.81% from 2020) was invested into 328 different space companies, as reported by Space Capital (a Venture Capital firm). The United States, understandably so, had the highest percentage of investments (62%), followed by Japan (30%), and then Italy (2%). Even though these 328 companies consisted of different space-based products, most of the investment flowed into one segment: launch and satellite (95%); the rest went into biospheres.

Governments and international institutions worldwide, mainly European, are also noticing this sector’s potential. The European Space program (already operating the likes of Copernicus Egnos and Galileo), with a budget of $14.67 billion spanning seven years from 2021 onwards, is one such example. It intends to fund applications based on services such as navigation and timing, space surveillance and tracking, and effective satellite communications.

This high investment has ultimately powered Aerospace companies to produce products spanning different industries and, therefore, customers. The applications can be divided into two broad contrasting categories, commercial, and defence.

Most commercial Aerospace applications have a futuristic ring to them, something straight out of science fiction novels and movies. They tend to be something that most people think of when asked about the future of technology. These Aerospace companies develop products with applications striving to increase human convenience. The sub-sectors attracting the most attention are:

While catering to a more conventional commercial market, applications like surveillance, logistics, and geospatial imagery can also fulfill and create demand for a different sector, military and defence. A significant funding source for private aerospace companies has been international governments (mainly the U.S. Federal Government). For example, according to an analysis by financial consulting firm McKinsey, out of the around $18 billion spent on space-related R&D expenditure in 2020, the U.S. Federal Government spent $12 billion. And now, especially with the current political environment referring to the Russian-Ukrainian war, many European countries (and beyond) who had wholly forsaken the idea of a high defence expenditure are forced to reevaluate. For example, Germany, which has resisted pressure for a long time, is now planning to increase its defence spending to 2% of its economic output (in addition to $100 billion) compared to 1.53% in 2021.

This is welcome news for Aerospace companies worldwide, but especially for European companies (European countries are increasingly planning to increase their spending on ‘made in Europe’ defence products), who are developing drones for operations like reconnaissance to provide battlefield intelligence, logistics to deliver essential cargo, and carrying out tasks that can be deemed as potentially dangerous.

Italy as a hub for Aerospace endeavours

Speaking of European Aerospace companies receiving a lot of attention, it might be surprising for some readers to find out that the Italian Aerospace and Defence industry ranks amongst the top 10 worldwide, with 300 SMEs and five regional players. The applications, of course, range from both military and commercial uses. The sector in Italy generates around €13 billion in revenues and is complemented by a highly skilled workforce of 64,000 employees. The ecosystem consists of many well-recognised international organisations with complex systems, encouraging small Italian Aerospace SME companies focused on the downstream and upstream activities of the supply chain. Leonardo, the Italian multinational company, and the eighth largest defence contractor globally, supports 52 Italian sites and supplies from 4,000 Italian SME suppliers.

D-Orbit is another such company that has become a leader in space logistics and orbital transportation services, after only being founded in 2011. The organization has already delivered more than 70 payloads into space.

The Italian Space Agency (ASI) also has a long history of bilateral cooperation with other international space agencies. NASA and ASI have traditionally been on many profitable space missions. The successful mission in December 2021, IXPE (Imaging X-ray Polarimetry Explorer satellite), born out of the two agencies’ successful partnership is one such recent example. Italy is also involved in EU programs such as GMES and Galileo, putting it on the third position in terms of contribution to the European Space Agency.

In the past, satellite technology has already changed our lives with things we now consider mundane like mobile phones, weather forecasts, credit card transactions, GPS, etc. This is just the tip of the iceberg. As aerospace technologies develop, ordinary people will be able to access a lifestyle with even more luxury and ease. Same-day deliveries, air taxis, even better internet connection and remote access; enhanced safety, more food security, and perhaps even space travel (for everybody), one day.

It should be said that very clearly, inventions in the aerospace sector aid many commercial applications. However, they can be hard to distinguish from and are part of the technological progress that often criticised military and defence spending has brought. With the ever-changing geopolitical environment, perhaps both applications could be something useful and ultimately lead to a better future. Nevertheless, we hope that the Venture Capital industry will enhance their efforts in doing their part to accelerate this much needed technological progress. Who knows, one day the industry might help aerospace companies develop another beloved superpower, time travel. It will also be interesting to track the Italian Aerospace industry’s progress over the next few years and celebrate achievements that would make the country proud and further its presence as one of the most scientifically advanced economies in the world.